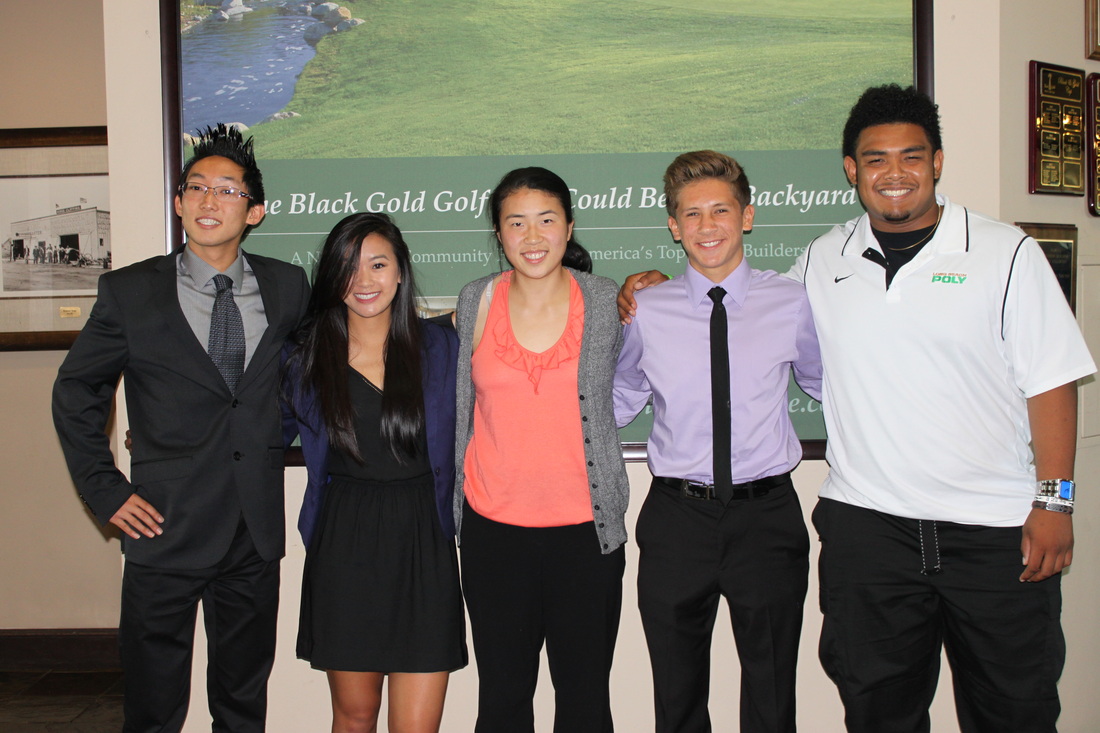 Elliot Choe-Burbank HS, Vivian Tran-Gabrielino HS, Kelsey Ueda-Culver City HS, Christian Cordell-Marina HS, Drew Ho-Long Beach Poly HS
Elliot Choe
Elliot is our first scholarship recipient who excels in American Sign Language.  Learning and practicing sign takes a specific kind of focus and determination that students need to find within themselves.  It’s these same characteristics that Elliot applies to sports and has helped him to break records and become the top distance runner at Burbank High.  Named First Team XC, Top 5 Runners in the Valley, Elliot is ranked 38th in California and 70th in the Nation.   He has been awarded the Minds in Motion Award for academic achievement and his keen interest in animation resulted in accolades at Councilman Kerkorian’s Film and Animation Festival two years running.  Elliot is undecided about which college he will attend, but It’s no surprise that his major will be animation graphic design.

Christian Cornell
Referred to as the “Justin Bieber” of Marina High, Christian is their star soccer player and a 4.0 scholar.  Team Captain, Offensive MVP, Orange County CIF All-Star, Captains Award Recipient, and All Sunset League Team Selection are just some of his athletic accomplishments.  (He also plays baseball and tennis.)  Off the field, Christian is Magna Cum Laude, Scholar with Honors, and ASB Treasurer.   Rumor has it that he also has  some mean dancing and singing skills as well.  Christian impressed his teachers and coaches with his humility, kindness, leadership, and heart.  He believes that the support he receives from his family has given him to confidence to excel.  Christian will attend the University of California San Diego where he will play soccer.

Drew Ho
A four-year offensive lineman at Long Beach Poly, this student athlete has earned the highest accolades from his teachers and coaches.  Voted Team Captain his junior and senior years, Drew lead his team to the CIF championship and State final game.  He was voted first team All Moore League and was recently named a National Football Foundation Scholar Athlete.  Teachers awarded Drew the “Pursuit of Excellence Award” and praise his diligence and focus.  Drew is very proud of his Japanese heritage and attributes his values of diligence, hard work, and respect for others to his culture.  He is also committed to serving his community, with well over 100 hours devoted to the Ronald McDonald House, Long Beach Soup Kitchen, and the Long Beach Charity Bike-a-Thon.   Drew will attend Whittier College as an engineering major.

Vivian Tran
It’s rare to find a multi-sport student athlete but Vivian is one.  During her years at Gabrielino High School, Vivian has played volleyball and ran track for 4 years, but her main sport has been basketball.  Team Captain, Defensive Player of the Year, First Team All Mission Valley League and a recipient of the Coach’s Award and Scholar Athlete, Vivian leaves Gabrielino as the second most decorated player in program history.  Her teachers and coaches praise her diligence, commitment to excellence, and compassion for others.  Vivian is a youth leader at her church and leads her own group of children at the annual Summer Camp.  She will attend UC Riverside and wants to become a nurse.

Kelsey Ueda
A 4.2 GPA Scholar Athlete, Kelsey graduates from Culver City High with high honors.   Principal’s Honor Roll, CSF member, and named to the National Society of High School Scholars, Kelsey has obviously excelled academically.  She has been a member of the Varsity Basketball Team all four years and Team Captain the past two.  Named to the All-CIF Team and Ocean League First Team, Kelsey led her team to two league championships and two trips to the CIF Southern Section Girls Finals with a championship win this year.   “Home grown,” Kelsey has played for the Venice Community Team, traveled to Japan with the Yonsei Team in 2010, and has been selected to the North/South All-Star Team for the past 3 years.  A dancer and choreographer, her talent has been demonstrated in many shows and assemblies.  Kelsey will attend UCLA in the fall to pursue a career in physical therapy.